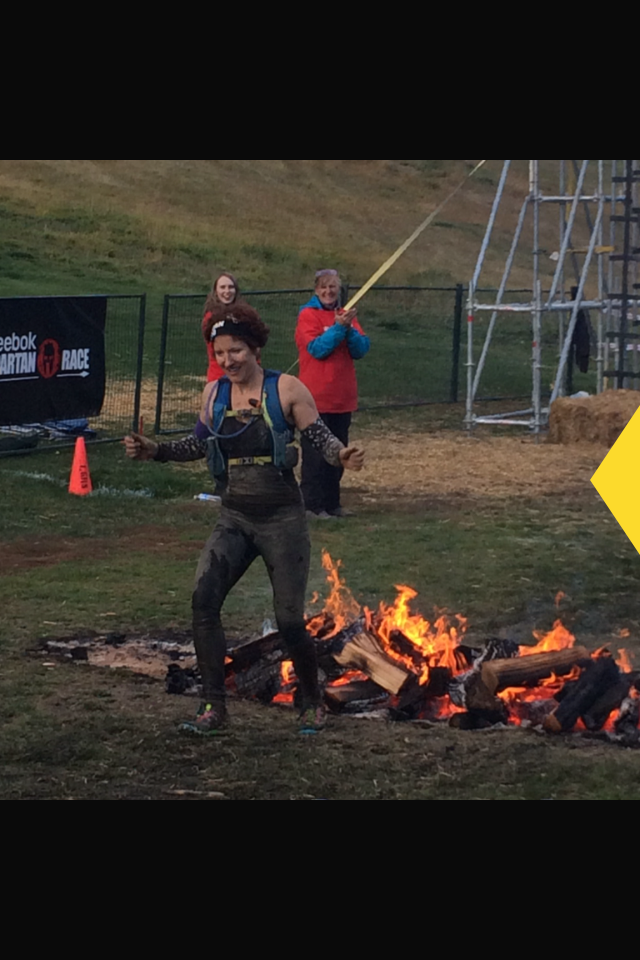 Nothing like being on the tail end of a flu and the starting line of an UltraBeast.
With the Spartan World Championship coming up in Tahoe next weekend and after having taken a few sick days with zero training, I thought getting back to normal with a long run in the mountains would do me good.

If I took it easy…

Although, I’m not sure taking it easy was an option out there.

They had the usual obstacles: a couple balances, a few walls (including one halfway up a steep slope), an O-U-T, three very cold crawls, a long hobie hop, mud mounds, traverse wall, cargo net, rope and spear.

I think the big change this year was the relentlessness of the climbs combined with the heavy stuff. There was a tractor tire drag, double sandbell carry, herc hoist, two log carries, tire carry, light bucket carry, tractor pull, and the longest atlas carry I’ve ever done.

The extra UltraBeast loop also had a heavy sandbag carry up a good vertical with no ladies option followed by a steep hike up a gnarly ski run.

It was a grinder for sure.

Mother Nature also added her own touch: blazing sun to blizzard and back again. I don’t normally change that much in a week… never mind a day.

I almost came off the traverse wall on the first lap since my hands were so frozen I couldn’t close my fingers.

I ended up changing arm warmers and gloves and then putting a long compression on at the drop bag tent halfway. I decided to cook myself in the sun on the climb in order to get my core temperature back up.

The big storm hit as I was just about to make the climb to The Top of the World. I put on my sunglasses to block the snow from my eyes but the wind was freezing me to my bones. A volunteer named Cheryl from the Herc Hoist gave me her almost brand new shell to block the wind. It was glorious… like stepping inside a sauna. I’ve never been so happy or so grateful.

My nose also eventually stopped bleeding. I had jammed a branch up it early on while doing burpees and it was like turning on a slow faucet.

I was still nauseous and dizzy. I was still tired. But I always try to focus on what’s going right and how I can make things even better. The flu isn’t going to magically evaporate but I can hydrate and fuel well and keep the pace and effort even.

The volunteers were outstanding. I’ve yet to see more engaged, more enthusiastic, more amazing ones anywhere.

Outside of obviously making more realistic cut offs (since technically only 24 people finished under the 6pm cutoff), I think they need an elite vs open UB heat.

It would clear up things like assisting one another at obstacles, taking burpees instead of doing carries and all that. Stuff you do in an open heat but not as an elite.

I do love the camaraderie aspect of people helping each other through to finish. It’s what makes these long races so special.

There was one guy on course on his second lap, with his knees blown out, looking for ways in which he could better everyone he passed. Just incredible – and a big part of what this community is about.

But I do feel things get tricky if you’re running for a podium spot. Then it’s got to be elite rules as far as I figure.

The hardest part of the day for me was watching the people who were pulled off course or just missed the cutoff. You know they poured their hearts and souls onto the course and they never got their moment to celebrate its completion.

Still, they ran the same course, conquered the same obstacles and fought the same fight that the official finishers did. Geez, some even went out onto their second lap determined to get as far as they could before they got pulled knowing that they probably wouldn’t make it to the finish line. These are the people I want my children growing up to be.