Once I remembered that I was no longer nursing, I ate an entire bottle of Cold FX last week in hopes of staving off Ama’s cold/flu. It did the job. Until of course, last night, the night before my first big race of 2013. Poop.

I woke up this morning with a foggy and congested head… but no where near the body aches and chills that I had yesterday. I wasn’t so sure how the race would go today. But I know that no matter which way it went it would hurt. Either because I was sick or because I wanted to push my pace… or more than likely both. My hope was that it would clear itself up went the gun went off – and it pretty much did.

It’s funny what you notice standing there in the shoot before blast off. Nervous runners bouncing up and down, lean and ready. A woman wearing a large hiking style water bottle holder who has pushed her way into the sub elite section. Watches, blank and ready for the button to be pushed. Spouses, children, parents and friends standing off the side. Waiting. Everybody just waiting.

And then it goes. Boom. Those of us trapped a few rows back pick up the pace slowly. Unlike those in the front row who lurch straight into race pace, we have a gentle transition… a few strides of jogging on the spot. But once we reach the mat, it’s on. Full on. It’s crowded and we all push through people who for some reason decided they should push to the front even though they are running much slower than those trapped behind them. I wonder if they mind being nearly run over.

The first few kilometres click by. Just about 4 minutes a k. Then we drop down to the seawall and the work begins. People fall back, people speed up. There is enough of a headwind to break the spirit. The seawall, as beautiful as it is, is always lonely on race day. It’s just not spectator friendly. It brings out the demons.

Nearing the end of the seawall my pelvis pops. The sensation is reminiscent of falling off a bike seat. I feel my pelvic floor start to struggle under the load. My inner thighs tighten in revolt. I feel like this might be the end of my race. I console myself that I ran well up until this point.

My pelvic floor cramps come in spasms… which made life difficult out there. Becoming engaged in a “yes you can”, “no you can’t” mind game is all too easy in distance running… cramping doesn’t help. Luckily I managed to shorten my stride and slow my pace enough during the spasms that they eventually became bearable. Ok, “I can” it is.

The trail beside Beaver Lake was a low point. “I’m finally out of Stanley Park!” Quickly turned into, ” Ugh, gravel”. But I was elated that my pelvis held up on the slippery surface, because normally that’s where it goes all the way.

One of the top local masters runners, Kevin O’Connor, is also a cheer master. He magically appear in my toughest moments of the final kilometers with just the right words and enthusiasm, lifting me from the depths of distance running.

Lisa Bentley once told me that I looked like a deer running in a meadow or wind over long grass. I have received several such compliments in my day before I got smoked by a truck. Today I received the coveted, “chiropractor’s dream” comment. It’s true. My friends wonder aloud why I was not rushed with the business cards of concerned therapeutic specialists post race. Apparently my one shoulder up, twisted body, one foot turned out look was cause for concern. It surprises people that I can look so damn ugly. Normally I hold that s**t in. “Keep the shoulder down, level the pelvis, don’t let the right foot over stride, feet straight, eyes on the horizon”. But at the end of a race run hard, your inner person shows itself. And my inner self happens to be crippled. I guess that’s not something I should be ashamed of. I have a lot to wrestle with hiding under what normally looks like a healthy balanced physique. Still, I wish so many people weren’t standing at the finish line. 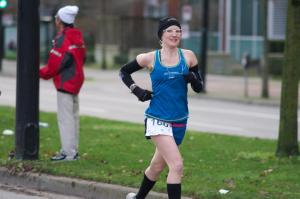 One thought on “Race report: First Half Marathon of 2013.”